Finding and Learning from Bright Spots 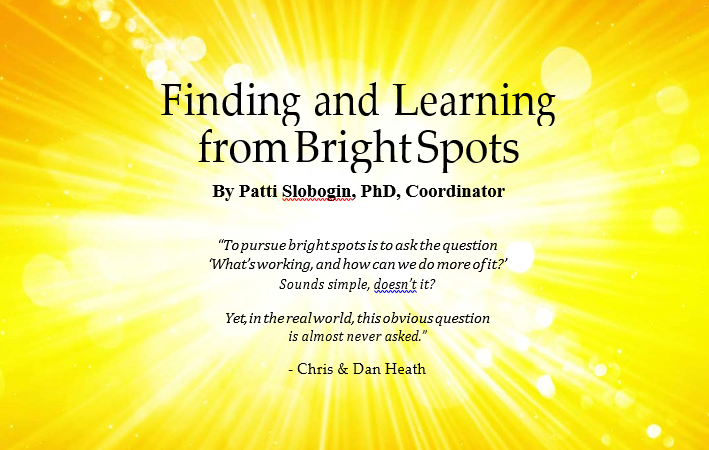 I have been thinking a lot about something I read two summers ago in the book Switch by Chip and Dan Heath. In a chapter titled Find the Bright Spots, they tell the story of Jerry Sternin, who went to Vietnam for Save the Children, and was given six months to develop a solution to the serious problem of malnutrition in children in rural communities. His conversations with experts on the topic focused on the many obstacles–poverty in the villages, ignorance about nutrition, poor sanitation and limited access to clean water. Sternin labeled these facts TBU, “True but Useless”. He acknowledged these obstacles, but knew that if he concentrated his efforts on solving poverty, ignorance and failing infrastructure he certainly would not solve the problem of malnutrition in six months, and maybe never. Instead of trying to develop solutions to highly complex problems, Sternin decided to spend his time identifying children in the villages who were bigger and healthier than others and studying the nutritional practices of their mothers; the Heath brothers call these mothers “bright spot” mothers. Sternin and his team created structures that supported other mothers in replicating the practices of bright spot mothers and, within 6 months, 65 percent of the children in the villages were better nourished. when researchers came to Vietnam later to gather independent data they found kids in Sternin’s villages were still healthier, including those who had been born after he left. Sternin’s team succeeded in creating lasting changes in practices that resulted in positive and important measurable change. In six months!

How did Sternin do this? What can we learn from his practices? Here are some lessons I took from his story and, in italics, questions it raised for me about our work:

In our work with districts and schools in 2013-2014 , we will be focusing more on finding and learning from bright spots. In upcoming issues of the RSE-TASC Reporter the trainers and school improvement specialists of the Lower Hudson Regional Partnership Center will be sharing bright spots from their work with educators in our region and identifying “locally grown” practices and systems that have led to a positive, important, observable improvements for students with disabilities.  Look for Bright Spots as a regular feature of the newsletter. We’d love to hear from you as well!